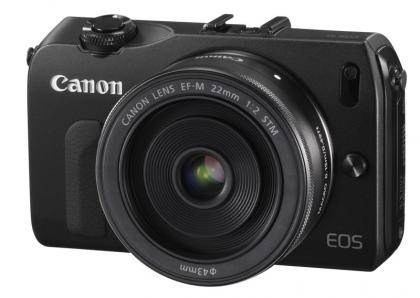 Compact system cameras (CSCs) have reshaped the digital camera market over the last four years, but it looked as if Canon was never going to join the fray. The inevitable has finally happened, though. The EOS M is Canon's first CSC. It introduces a new lens mount called EF-M, and uses the same 18-megapixel sensor as the Canon EOS 650D .

There are currently two EF-M lenses available. The 18-55mm 3x zoom is typical fare for a kit lens. There's also a 22mm f/2 pancake, which is what we were sent for review. This gives a 35mm equivalent focal length, which is perfect for general snapping. The f/2 aperture allows for some flattering shallow depth-of-field effects for nearby subjects, and gathers plenty of light for low-light shooting. It doesn't include optical stabilisation, though.

The camera's design is extremely luxurious, decked out in matt black magnesium alloy and nicely shaped to fit in one hand. Even so, it felt fairly vulnerable when we took photos over the side of a bridge on a cold, windy day. The Sony NEX-5R is much easier to hold onto with its proper handgrip. The EOS M's slim design also means a small battery, which lasts for just 230 shots. 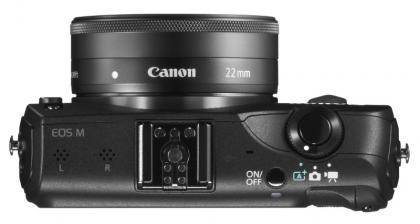 The accessory shoe is a welcome addition

It's primarily aimed at point-and-shoot photographers, with a single rotary control on the back, fewer buttons than on most cheap compacts and a mode switch with just three settings for automatic shooting, scene modes and video. The inclusion of an accessory shoe on top is the main clue that this camera is designed for more demanding users too. There's no integrated flash, but Canon has launched a diminutive flashgun, the Speedlite 90EX, to complement the EOS M. Although it wasn't supplied for review, we've been assured that it comes as standard in both the 18-55mm and 22mm kits. It has a guide number of 9m, which is a little stronger than most integrated flashes. It looks pretty bulky in photos, though, and runs off AAA batteries. An integrated flash would have been more sensible for point-and-shoot operation. 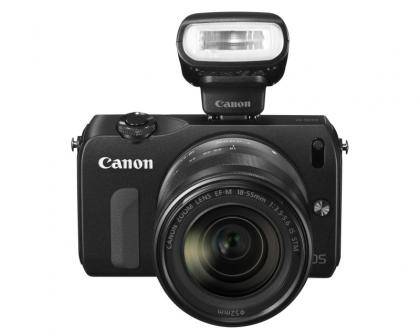 The bundled flash is bulky but more powerful than most

The scarcity of buttons and dials is amply compensated by a superb touchscreen interface. In most shooting modes there's very little to adjust, but program, priority and manual exposure modes are nestling in among the scene presets. Selecting them unlocks all the usual functions. The most important ones are presented in a quick-access menu, but custom white balance is conspicuously absent here. It requires a photo to be captured to memory card first, followed by a trip to the main menu to calibrate from that photo. Various focus options appear in the Q Menu but manual focus is only available via the main menu. 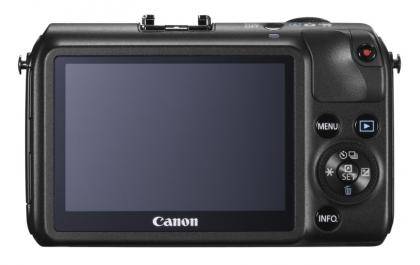 The menus and touchscreen controls are almost identical to the 650D's, and with the same sensor, the EOS M gives a strong impression of being the guts of a 650D crammed into a smaller body. Sadly, this impression extends to the autofocus performance. The sensor includes phase-detect autofocus points to assist the contrast-detect autofocus system, but as with the 650D's live view mode, it doesn't give a huge benefit. Focusing was worryingly slow in our tests, taking 1.7 seconds on average between pressing the shutter button and taking a photo. In household artificial lighting this increased to 2.9 seconds, sometimes taking over five seconds to focus. Even in the most favourable conditions, the fastest we measured was 1.1 seconds.

This made it virtually impossible to photograph fast-paced action. Slower-moving subjects such as candid portraits were tricky too, with the subject often wandering out of focus or even out of the frame before the picture was taken. Shot-to-shot times were slow in manual focus mode at 1.4 seconds, but 2.7 seconds between shots with autofocus is really disappointing for such an expensive camera. Most other CSCs can focus and shoot every second or faster, making it easy to fire off a string of shots and choose the best later.

The EOS M saved a bit of face in continuous mode, delivering 4fps shooting until the card was full. This was with fixed focus and exposure settings, though. Enabling continuous autofocus slashed performance to 1.2fps. This still wasn't slow enough to give the camera enough time to focus properly. When we moved to a further or nearer subject in the middle of a burst of shots, it typically took about 10 frames before the camera successfully focused on the new subject.

The EF-EOS M mount adapter may appeal to long-term Canon users with lens collections, but surely such photographers will have a far better SLR to mount them on too?

Canon also sent us the EF-EOS M mount adapter, which allows its SLR lenses to be used on the EOS M. We tried the 50mm f/1.8 and 18-135mm f/3.5-5.6 IS, and found that focusing speeds were even worse than with the 22mm lens. It often spent three or four seconds jolting back and forth, and sometimes failed to focus altogether. That's a big concern for anyone who's hoping to use this camera with an existing collection of EF lenses. Regardless, we're not convinced by these lens adapters for CSCs. Attaching a big lens and an adapter loses their size advantage and makes them feel unbalanced. If you want to use an SLR lens you may as well attach it to an SLR.