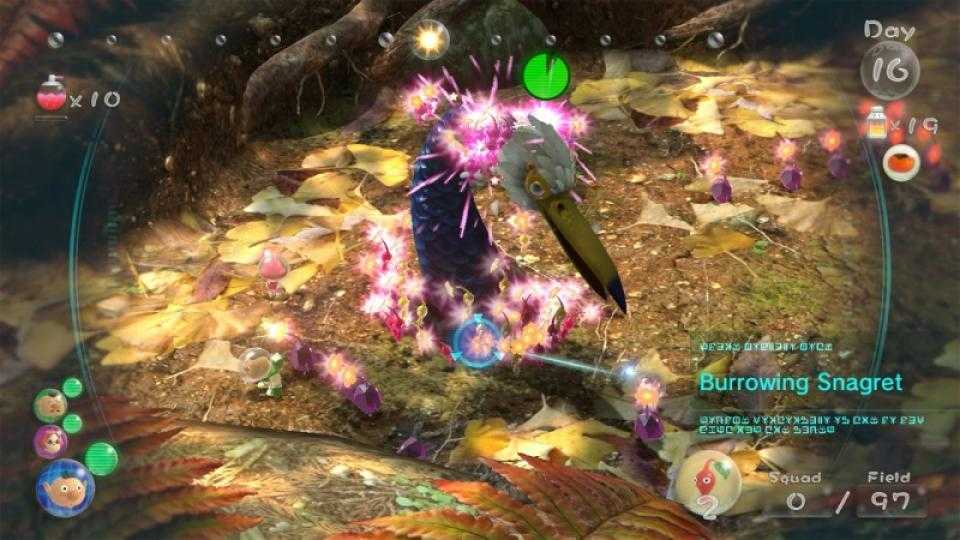 You know eating fruit is good for you, but sometimes you can get a nasty surprise. A mushy banana is bad enough or a kiwi so sharp it leaves you reeling. Even worse is sinking your teeth into a crispy apple only to find a furry-legged interloper has already beaten you to the core.

It’s enough to put anyone off their five a day, but thankfully this isn’t a problem with the bountiful cornucopia of tangy treats in Pikmin 3. Here, oranges are pimpled to perfection, grapes look ripe with flavour, and you can see every tiny hair on a slice of kiwi as it bristles through the undergrowth. We’ve never seen such a delicious looking harvest, virtual or otherwise, and it’s your job to secure these tasty luxuries and bring them back to your home planet so the starving citizens of Koppai don’t start gnawing off their own legs.

Just like previous Pikmin games, though, the local wildlife aren’t best pleased about you barging in and stealing their precious food supply, so you’ll need to devise a few cunning strategies to transport your cargo back to your ship. You’d think this would be quite easy with three characters to split the work load as you wander through the four beautiful season-themed environments, but when your trio of explorers barely stand knee high to a grasshopper, those tiny cherries start looking awfully large.

Some pieces of fruit have been swallowed by enemies, but you'll have to have a large force of Pikmin to take them down

Luckily, you don’t have to face this mammoth task alone, as the indigenous Pikmin population are back once again to heed your beck and call. Red, Blue and Yellow Pikmin make a welcome return from previous entries in the series, but they’re now more versatile than ever. As well as retaining all their old traits (Red Pikmin are inflammable and are much better fighters, Blue Pikmin can survive underwater, and Yellow Pikmin are impervious to electrical enemies and can be thrown much higher than any other type of Pikmin), all of them can now burrow for underground treasure and carry bomb rocks to make multitasking a little easier than before.

Yellow Pikmin can even generate an electric current when faced with a pair of broken live wires to light up surrounding caves, but the real game changers come in the form of two brand new Pikmin types. Rock Pikmin can smash through glass and ice with their large, flint-like bodies while Winged Pikmin can airlift their cargo over water as well as pluck certain plants from the ground. Both add a refreshing change of pace to the tasks and challenges you’ll encounter on your journey. 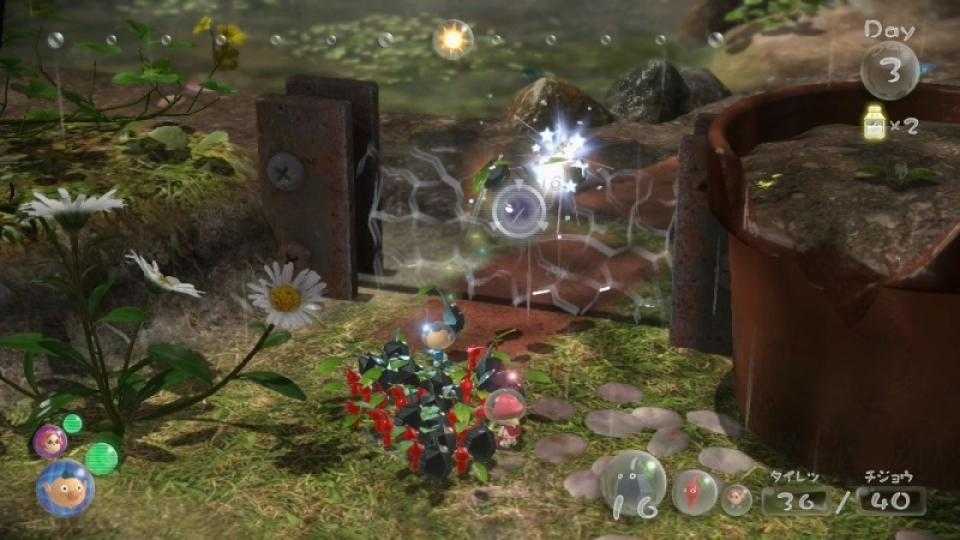 As always, you’ll need to keep a watchful eye over them lest they get chomped by a crafty pack of Bulborbs, but sometimes it feels much more like you’re dealing with stroppy children than willing helpers, as one thing they’ve failed to improve is their spatial-awareness. Most Pikmin will follow dutifully in line behind you, but there’ll always be the odd couple of stragglers that will get stuck behind walls or veer off in a different direction and then get hopelessly lost, leading to a frantic scramble trying to reclaim them at the end of the day.

Thankfully, the GamePad’s touchscreen map keeps track of where everyone is, so we never had any trouble hunting them down – it was just a matter of whether we could get to them in time before the sun went down. For once the sun sets, that’s it; your Pikmin are left to fend for themselves (die horribly) as you retreat for the night into the atmosphere above.

More frustrating, though, were the unintuitive GamePad controls. For a first party title, the GamePad actually felt like quite an unnatural way to play, and we found a Wii Motion Plus Remote and nunchuk were far more suited to aiming and throwing our Pikmin than dual analogue sticks. That’s not to say the GamePad’s completely redundant. In fact, it’s invaluable as a navigation tool and we would frequently sit with it in our laps to help scout for missed fruit and to track down lost Pikmin. There’s also a neat camera feature which utilises the GamePad’s gyroscope that lets you take pictures from within your crowd of Pikmin to share with your friends on Miiverse. 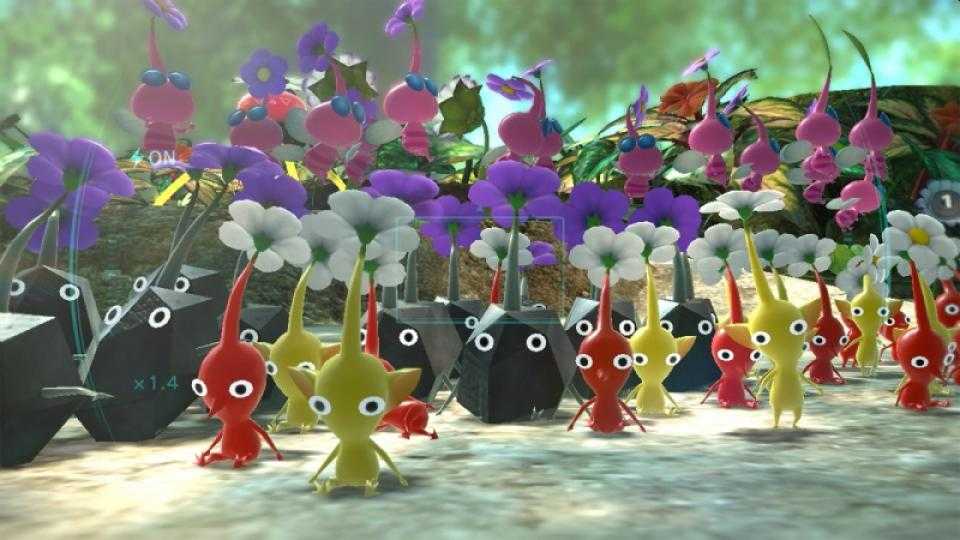 The camera lets you see your Pikmin up close and personal

Of course, sometimes even the most carefully plotted plan can go horribly wrong if you accidentally run into battle unprepared or find you don’t have the right Pikmin to carry on. All is not lost, though, as there are several ways to rectify your mistakes. You can either start the entire day from scratch or go back to an earlier point in time and replay a different day altogether. Going back in time will mean you’ll lose all your save data from that point on, but it’s a handy last resort if things go really pear-shaped.

Admittedly, this rather waters down the strategy involved in completing your day successfully, but one thing you do have to keep on top of is how much fruit you’ve collected. Your team also needs to eat, after all, and they’ll consume one canister of fruit juice extract at the end of every day. This harks back to the threat of the original Pikmin’s 30-day time limit, but this burden is also a very light blend of imposed strategy as you quickly build up quite a substantial fruit juice buffer. There’s very little pressure to track down all 66 pieces of fruit before you finish the game as well, and unless you really dawdle or waste a lot of time, you can more or less explore the world at your own pace. 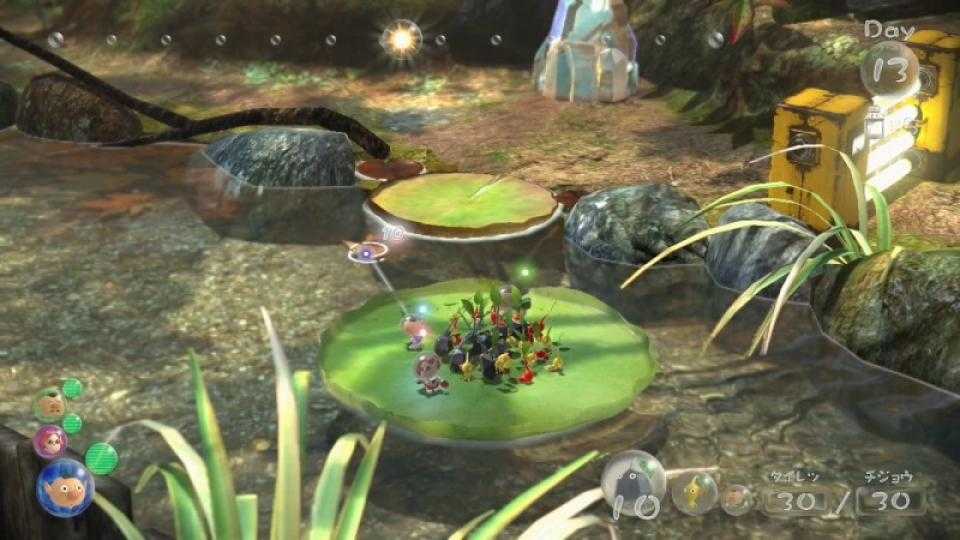 This makes the main story feel far more like Pikmin 2 than the original Pikmin, but it’s still an absolute joy to discover. The lighting is some of the best we've seen on Wii U and the Pikmin themselves are incredibly charming in their naivety. You’d have to have a heart of stone not to feel a pang of remorse when you accidentally hurl them straight into the hungry jaws of an Armoured Mawdad, but there's a lot of humour to be found here, too. Alph, Brittany and Captain Charlie's daily logs and fruit reports are surprisingly heartfelt and wonderfully juvenile at times, and it’s hard to resist the game’s endearing tug on your heartstrings.

For those who really want to pile on the pressure, though, Pikmin 3’s Mission Mode will be an absolute treat. These time attack games are all about scoring as many points as possible and require some serious planning and multitasking skills. There are three categories in total: collecting treasure, battling enemies and reliving the main story’s six boss battles, and you can either tackle them alone or with a friend via split-screen co-op. Each mission has its own set of rules, including the number of companions you have as well as the type of Pikmin available, and here you’ll also find the super-strong Purple Pikmin and poisonous White Pikmin from Pikmin 2 to spice things up a bit.

If only all fruit looked this tasty

If you’d rather put your Pikmin skills head-to-head with a friend, then Bingo Battle is for you. Each player is given a 4x4 grid of certain collectibles and the aim is to complete one line in any direction before your opponent by taking them back to your Pikmin Onion. Bizarrely, there’s also an extra rule where victory can be secured by capturing your opponent’s macaroon, but all’s fair in love and war in Bingo Battle, as you can even order your Pikmin to attack the opposing team to help decimate their squad.

As fun as Mission Mode and Bingo Battle are, though, Pikmin 3 still feels painfully brief compared to the sprawling nature of its predecessor. It’s certainly a more refined experience as major plot points never miss a beat and you’re always working toward a tangible objective, but it rarely feels like it’s achieving its full potential.

When you take a treasure back to your Onion, your opponent won't be able to use that item on their bingo card until it reappears

This isn’t helped by its minor identity crisis either. It clearly craves to be a Wii game, but this makes the seeds of its personality feel like they’re a little too tangled in the roots of its predecessors to be a truly new evolution of the series. Considering the Wii U is so ripe for co-op play, it’s a shame the main story doesn’t feature more multiplayer options that really make use of the three playable characters, but all these complaints are rather trivial when Pikmin 3 is so overflowing with charm, character, and most of all, deliciously tasty-looking fruit. It’s not perfect, but if you make Pikmin 3 one of your five a day, you certainly won’t regret it.