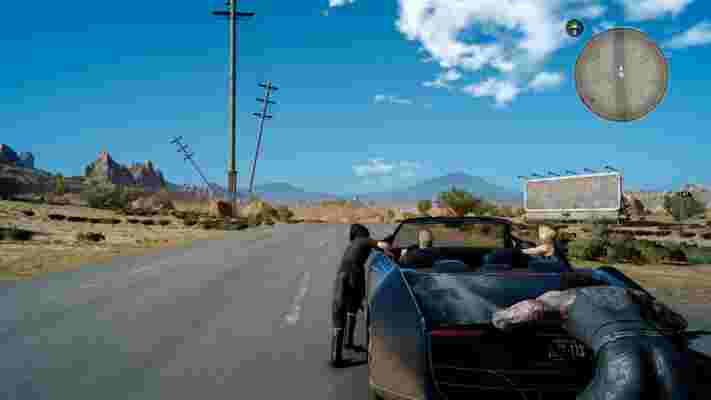 Final Fantasy XV begins with a broken-down car. It's hardly the most fanciful start for prince Noctis and his loyal retainers, but when you're stuck in a desert on the way to a wedding – without a single chocobo nearby to help wrangle into service – what's a pampered royal to do, except argue about whether beefcake Gladiolus is burly enough to push it all by himself? Prompto's skinny arms certainly won't be much help, and Ignis needs to be upfront in the driver's seat in order to steer. Will it really make any difference if Noctis lets go, even just a little bit? Probably not.

And yet, for all its ordinariness, this little scene captures the tone of Final Fantasy XV perfectly. In what will no doubt become an epic tale of bromance and world-saving heroics, our main leads are really just four lads on a stag do having a bit of a jolly. They goad and chide each other as they chat in the car or in the field, they fidget restlessly in their seats as you drive toward your next destination, and Prompto's incessant camera-snapping both delights and infuriates his friends in equal measure. They're an incredibly real and natural bunch of characters, and their idle interactions with each other make them some of the most believable creations I've ever seen.

Little do they know, though, that their entire world is about to change, as neighbouring baddies Niflheim gradually encroach further and further into Noctis' kingdom of Lucis. We're mostly removed from the action taking place back home during my first four hours with the game, but as blockades and checkpoints start cropping up across the map – not to mention the sudden cancellation of our boat to Altissia – these menacing undertones continue to bubble up through the cracks throughout the game's opening act.

Fortunately, the sheer size of Final Fantasy XV means there are plenty of diversions to take your mind off things should you need a breather. You'll have to go looking for them, mind, as the fenced-in roads mean your beloved set of wheels can't go off the beaten track in search of caves and side quests. Instead, you'll need to do things the old-fashioned way by pulling over and hopping out on foot, leaving your motorised carriage on the side of the road. Once you're away, you'll be able to help out other broken-down travellers, take on hunting quests to earn you more money, or even go off for a bit of sightseeing in the neighbouring region of Duscae, the setting for last year's sizable demo episode of the same name.

Admittedly, I found it quite hard to drag myself away from the in-game radio, which tootles out classic Final Fantasy tunes at the touch of a button. It might sound archaic, but there really is nothing like bombing down the road to the sound of "Clash on the Big Bridge" from Final Fantasy V . You don't even have to drive if you don’t want to, as Ignis will assume chauffeuring duties automatically if you wish. That might sound like it's wrenching control away from the player, but when the manual controls are still largely on-rails, you might as well just kick back, take in the scenery and listen to a bit of music now and then. 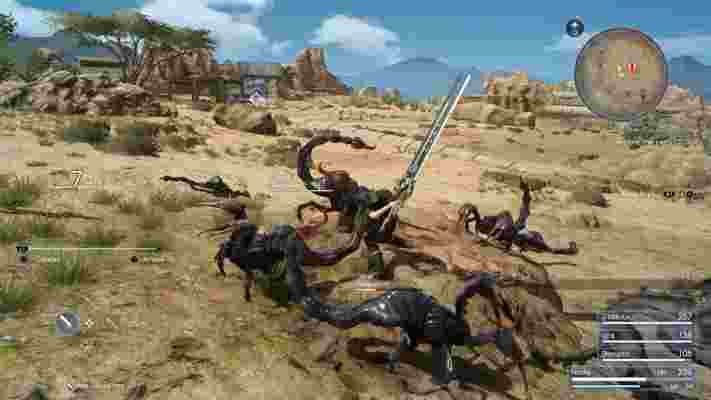 You'll probably need a break after tussling with Final Fantasy XV 's rather rambunctious set of monsters, as it took quite a while to settle into the game's brand-new Active Cross battle system. Taking place in real-time, Final Fantasy XV 's active combat almost has more in common with action adventure games such as Dark Souls III than it does with other titles in its own franchise; you'll need to strike a fine balance between going on the offensive and using your warp powers to retreat back to higher ground to give your health and magic points time to recharge.

It makes for wonderfully frenetic and dynamic battles, and when you're dancing between roving rhinos and bloodthirsty demon hounds, it can seem weirdly balletic when you hit all the right dodge and counter prompts. Abuse your powers too heavily, however, and Noctis will enter a temporary stasis mode, preventing him from warping or getting out of harm's way under he recovers. I met my demise quite a few times this way, and I suspect it will take a bit more practice before the whole process becomes second nature. 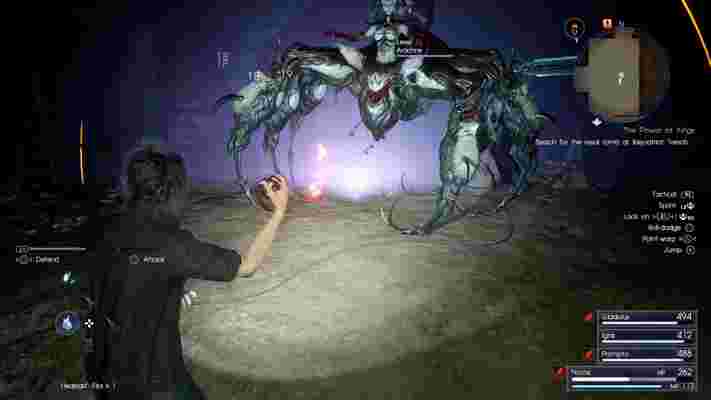 Fortunately, your teammates are often on hand to help out if they're nearby, either pulling you out of a daze or doling out one of your healing items when you're in trouble. They all act independently of Noctis, but once you've clocked up enough hits, a quick tap of the left shoulder button allows you to issue individual character commands and initiate devastating combo attacks.

If the combat takes some getting used to, the rest of FFXV's mechanics should feel right at home for series veterans. XV's magic system, for instance (which will have you scraping your jaw off the floor as you watch its stunning, visual light shows fill your TV), takes several cues from Final Fantasy VIII 's draw points. 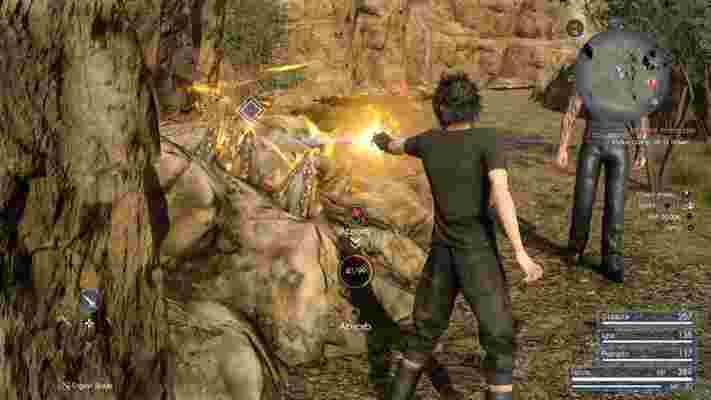 Instead of being permanent, equippable skills, magic must be collected from designated mineral deposits scattered around the map. These elements are useless on their own, but combine them with other minerals and you'll soon be able to wield classic spells such as Fire, Fira and Firaga in no time – albeit in limited, one-time-only quantities.

So far, so FFVIII, but XV adds its own twist to the formula by letting you throw in other items to the mix, such as monster spoils or healing items from your inventory. These can add extra effects to your spells, such as poison, paralysis and additional hits, or – if you add a potion, say – can even heal your party upon casting. The possibilities are truly endless, so if you liked crafting items with Rikku from Final Fantasy X , you'll absolutely love this. Likewise, the fact you can only make a few spells at a time makes them feel that much more precious and special when you unleash them in the wild.

XV's Astral Sphere tree harks back to FFX's Sphere Grid as well, as each character has their own set of branching skill sets laid out on a giant circular map. Individual stat upgrades are (thankfully) handled by XV's more traditional levelling-up system, but ability points are now shared across your entire party, so you'll need to pick your new moves wisely to make sure no-one is left behind at the expense of others.

I didn't want to put down the pad after four hours. Not only is this the most ambitious Final Fantasy game ever made, but it's also the most visually impressive, despite the shorter draw distance and lower resolution of the Xbox One version I played. The technical issues from previous demos have all been ironed out, and the tantalising hints of other realms beyond the borders of the desert only make me want to explore the game even more. It's a shame it's been delayed until 29 November, but from what I've seen so far, I'm sure it will be more than worth the wait.