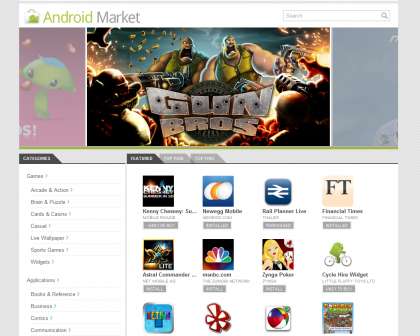 While Google was showing off Android 3.0 Honeycomb it also took the trouble to launch the new web version of the Android Market.

It's always been the one part of the Android puzzle missing, in our opinion, as until yesterday the only way to find new applications was to use the Market app on a mobile phone. While this does a generally good job, particularly since the recent interface update, the Market is designed to hide applications that won't work with a particular handset.

With the new market.android.com store in place, you can browse through every single application that's on there. More importantly, you can send links to your friends of apps that they should be using.

So far, so Apple App Store, but Google has gone one better. Provided you're signed into the Market with your Google Account, you can then install, but not remove, any app directly from the web interface. Clicking the install button brings up a list of your registered Android Phones, so you can select the one you want to install it on. Alternatively, if you open a link from an Android phone, the app opens in the Market. We've updated our Top 20 Free Android Apps article to include links to all of our favourite apps. 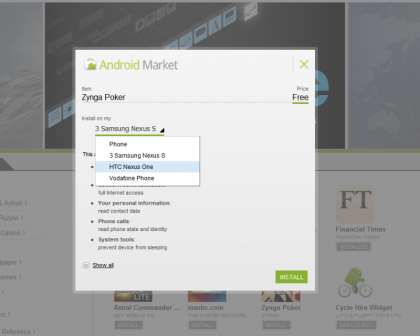 The system works really well, but success can depend on the connection you're using. Testing when connected to our corporate WiFi we didn't get any installations; disconnecting and joining the 3G network fixed the problem and app downloads and installs were almost instantaneous.

We also had an issue when we first logged in using Chrome on our PC, where we were told that the site might be dangerous. This seems to be because of a redirect problem using our Google Apps account, but bugs like this will get ironed out.

Finally, Google has said that it's working to sort out fixed currency exchange rates, to create flatter more simplified app prices. Expect to see these changes soon. As it stands, though, Google's managed to make the Android Market a great deal better and even beat Apple.