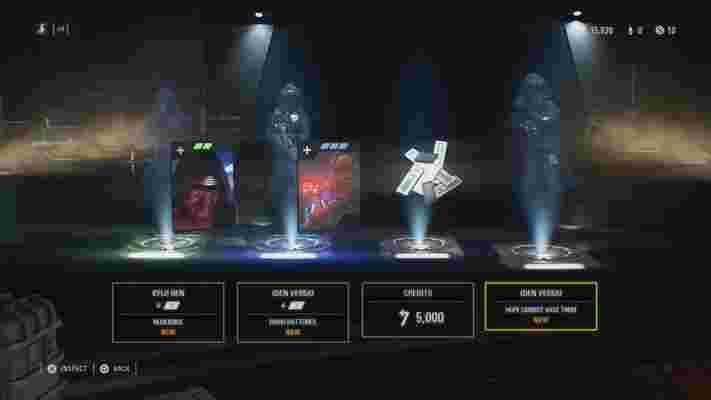 Can it be true? Yes, it can! As of Spring 2018 EA and DICE have totally overhauled the level up system for Star Wars Battlefront II, and the infamous loot boxes have been (almost) entirely removed from the game. Star cards are still present and an integral part of the game’s progression, but no longer will players have to shove credits into a slot machine in hopes of receiving abilities and upgrades. Good on you, EA.

This is all well and good, but so how does progression work now? What about crafting and new character skins? How can we unlock new emotes for  Bossk??

Let’s go over the new changes:

Only the daily crate remains

The only loot box you’ll have access to anymore is your daily crate, which spawns a consistent 500 credits.

If you haven’t logged into Battlefront since the new update, you’ll be happy to find a dozen crates that reward you with various unlocks, skins, and cards. Once you open them, though, that’s it ! Just daily crates from here on out.

Credits will only buy you aesthetics

Credits are still the currency earned from playing matches, and they are still awarded more for completing milestones or staying the duration of a match than they are for actually getting eliminations (kills and assists). Completing objectives is also a factor here, but being in the top 5 players won’t necessarily grant you any extra credits. Not that they ever really did. Since there are no loot crates anymore, you can’t spend credits on that either.

Credits themselves can no longer be spent on star cards in any way. They’re instead used for unlocking new skins for your characters, both infantry and heroes, and there are plenty to choose from. Our favorites are Cloud City Lando and Ahch-To Rey. There are some occasional instances where credits can be used to unlock heroes, but that’s mostly for ships (like the Millenium Falcon with Lando and L3-37).

What about emotes and victory poses?

If you check pages for emotes and victory poses you’ll see it still says “available in crates.” But there are no crates aside from the daily, so what gives?

Completing daily challenges (listed at the bottom of the game’s opening screen) seems to be the way to unlock them. As for which ones you’ll unlock by completing them, looks like it’ll just be a surprise. Expect EA to clear this up in the coming weeks.

Characters skins are organized by rarity

The two costumes from the Solo movie are legendary, requiring a whopping 80,000 credits to earn.

Skill Points are used to level up star cards

This new change is a big one: Unlocking and upgrading your star cards is now a matter of leveling up your characters and spending skill points on your chosen cards. The way this works is by playing as a specific class, hero, or ship, and just generally doing well – completing objectives, scoring kills and assists, and using your abilities effectively. Earn enough experience and eventually, you’ll level up your character and/or earn a new skill point.

TL, DR: Play well with your character and you earn experience. Get enough exp and you’re awarded a skill point. Use the skill points to upgrade and unlock your cards.

Oddly enough, there are now some star cards that are deemed more powerful than others from the start. The end result is that there are now certain abilities that are restricted until you reach a prerequisite level with the character.

This is an odd choice because it was not previously implied that any star cards were supposed to be objectively more powerful than others; it’s all about how you decide to build your character, or how much you’d upgraded your cards. But at least unlocking powerful cards isn’t just up to chance anymore! If there’s a particular card you really want for your character, you’ll just have to play as them more in order to reach the level that unlocks it.

Similar to our above point, you aren’t able to upgrade your star cards past a certain efficiency level unless you’re at the required level to boost it.

Even if you have a skill point to spend, you won’t necessarily be able to spend it on bumping a card up to epic; some cards require you to be as high as level 35 (25 for heroes) with your character before they can be upgraded as high as epic. Rare cards will need you to be level 12.

Crystals can now be purchased with real money

Click the “get more crystals” button and you’ll be able to spend actual hard cash on anything that you could spend in-game credits on. Thankfully, these crystals cannot do anything in the way of actually upgrading your characters, which means the only thing you can spend actual money on is character aesthetics, just like in Fortnite. We’re okay with this.

$2.49 will earn you 200 crystals, while $39.99 will get you 4400, enough to buy all the costumes you want. Crystals can still be earned the down and dirty way, completing milestones, but the rewarded crystals haven’t scaled with the new update; you’ll be receiving the equivalent of pennies.

Crafting Parts are no longer obtainable

Since loot boxes have been removed and skill points are the new way to upgrade, crafting parts are no longer a functional element of Battlefront II. If you’d been hoarding them like we did, fear not; your saved crafting parts can all be converted into skill points for any class or character you like.

You just can’t use them on cards you don’t meet the level for.

All your previously earned upgrades are unaffected by the update

In the same vein as the crafting parts turning into skill points, for better or for worse any star cards you’ve previously unlocked or upgraded will remain just as they were before the upgrade. No player will have to re-earn star cards or upgrades that they already unlocked.

This is good for players who put in the time and skill to be rewarded with the cards they wanted … but it is a little unbalanced now that there are some players who happened upon epic cards via either loot crates or pre-ordering the game. The rest of us have to work to unlock them.

While this is unfortunate, we think in the end it’s still better than players losing gear they already had and having to unlock them all over again. Overall we think these changes have improved the progression system for Battlefront II, and are anxious to see whether it will rekindle people’s interest in the game. Battlefront II’s rocky release hit it pretty hard … but strike something down and it may become more powerful than you can possibly imagine.

What can we expect from Respawn’s upcoming Star Wars game? ►

How to add 60+ hours of replayability to Star Wars: Jedi Academy ►

5 things EA can learn from Fortnite ►