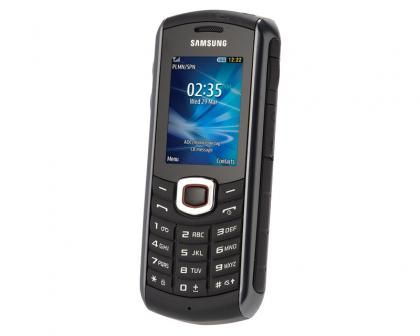 The Samsung Solid Immerse is the first feature phone we've reviewed in a while, and it lacks many of the features we'd expect on the smartphones we normally review. However, as its name suggests, it's a well-built phone that's water, dust and scratch-resistant. The screen is hardened to resist scratches, while the phone can operate at a depth of 1m and stay submerged for up to 30 minutes, according to Samsung.

The keypad is composed of a single piece of rubber with grooves between the numbers, all the ports have covers with rubber seals, and the back cover has to be screwed into place to seal it. This waterproofing meant that we could immerse it in a bowl of water and still operate the phone. Its chunky plastic construction feels tough, but the downside is that the phone is at least twice as thick as the average smartphone, if narrower. At 115g, it's quite light, however.

Designed for adventurous types or those who work in areas where a phone is likely to attract dust or shocks, the Solid Immerse also comes with a large plastic loop built into the top of the phone for attaching a lanyard, next to a bright LED torch that's activated by holding down a large button on the side. The keys are large and chunky, and Samsung claims they can be used even when wearing gloves. Under a protective cover on the rear there's also 2-megapixel camera that shoots grainy photos and video.

The screen looks tiny compared to a smartphone's, but it's clear and bright, although its horizontal viewing angles are narrow; turning the phone to the left causes the screen to brighten, while tilting it to the right makes it darker.

We found it fairly easy to navigate the basic features. You can scroll side-to-side through a row of icons at the top of the screen to access the various functions, which include messaging, the camera, music, Google, Facebook, Twitter and search. The latter is a local search of resources on the phone, such as music or other files.