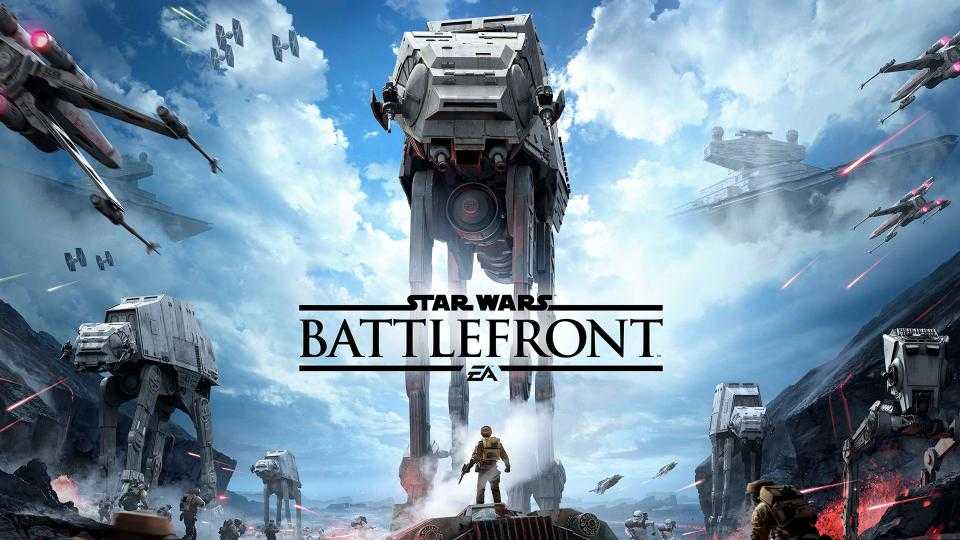 With the anticipation for The Force Awakens nearing fever pitch, EA has perfectly timed its DICE-developed revival of the Battlefront franchise. With Lucasfilm providing access to props, audio libraries and locations, it’s incredibly faithful to the source material and looks absolutely stunning on the Frostbite engine.

The lush forests of Endor, icy moons of Hoth and the rocky deserts of Tatooine are all brilliantly replicated, and the attention to detail is staggering at times; Endor’s ferns and foliage look almost life-like up close, as do the rocks and sands of Tatooine. The particle effects that spray outwards whenever you land a blaster shot are eye-searingly bright, just as they should be. Each blaster is beautifully modelled in first person view, as are many of the vehicle cockpits, but the third person camera better shows off the smooth animations. The audio is equally fantastic. Hand-held blasters sound just like the films, while heavier mounted guns and turrets have their own distinct zaps, giving them a much beefier feel.

It’s not perfect, however; the six Hero characters all have oddly unrealistic rendered faces, with Luke Skywalker, Princess Leia, Han Solo and the Emperor all looking like they were sculpted from plasticine. It’s even more jarring because the cast of playable imperial soldiers and rebel fighters look more lifelike. Annoyingly you have to rank up to level 40 before you can play as one of the Star Wars universe’s many alien races - meaning most online matches are strictly human vs human until players have spent more time in-game. The Hero and Villain characters are naturally overpowered, so there can only be one of each in play at any one time, but finding the relevant unlock token and taking control of Skywalker's 'sabre is immensely satisfying. 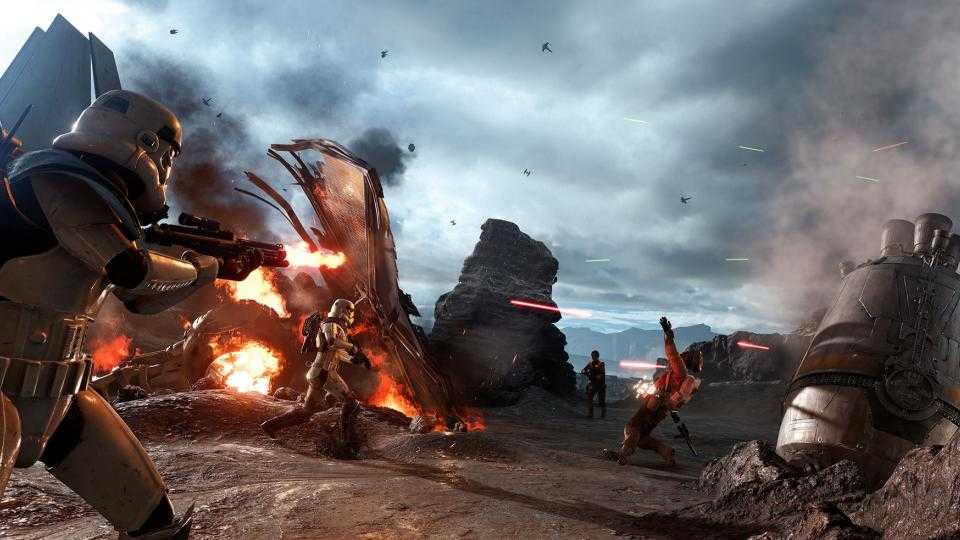 As a strongly multiplayer-focused title, how much you get out of Battlefront will depend entirely on whether you’re willing to join a server and play with other gamers. There is a two player, wave-based cooperative mode, and a series of excellent training missions that drop you straight into an X-Wing, AT-ST or speeder bike, but the only AI bot-populated mode is team deathmatch. Once you’ve tried them all, it starts feeling repetitive surprisingly quickly.

If you don’t head online, you’ll miss out on the Supremacy and Walker Assault modes. The former is a Star Wars spin on Battlefield’s Conquest and Rush modes, with teams fighting over multiple control points. Claiming them all ensures victory, but you can only contest two points at a time; it helps focus the match around a particular part of the map, which is crucial for making the expansive levels feel populated.

The latter is undoubtedly the best mode in the game, pitting teams of 20 against each other in an asymmetrical attack/defend scenario. Imperials must defend an AT-AT as it walks towards a Rebel base, and the Rebels try to destroy it before it gets there. Holding control points makes the AT-AT more vulnerable.

While this is brilliant fun (particularly when you get to pilot the AT-AT, or use snow speeders to take one down on Hoth) the limited map selection gets stale rather quickly. With a literal universe of locations to draw from, it’s disappointing that Hoth, Tatooine, Endor and Sullust are the only featured worlds. It makes sense that less iconic locations didn’t make the cut, but it’s amazing there’s no Death Star battle. Much of this missing content will be made available through a DLC season pass, which will also include four additional heroes and new weapons, but it costs an eye-watering £40 – practically doubling the price of the game. It's even more frustrating that it is advertised on the game's main menu, with EA's marketing suggesting your experience "won't be complete" without it. 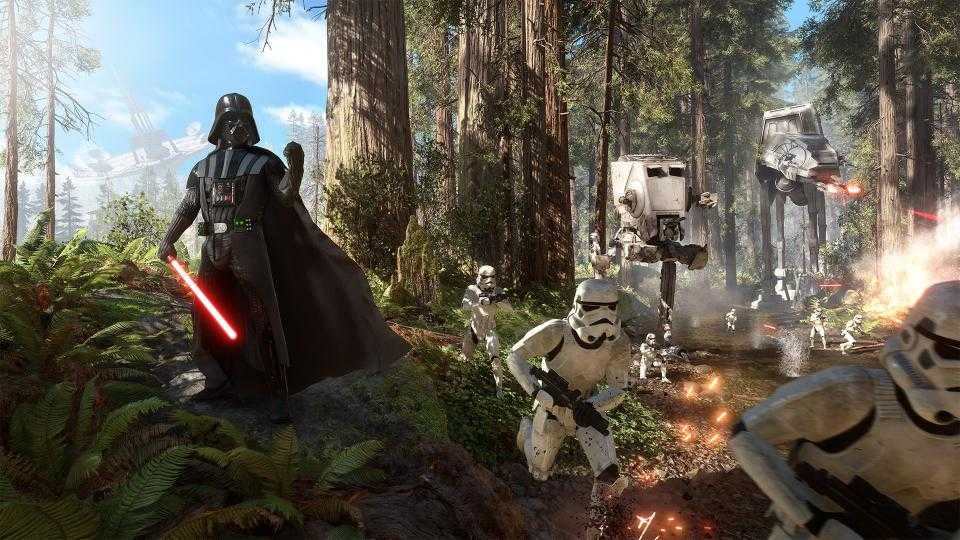 Once you get beyond the gorgeous visuals, the simplified mechanics and gameplay restrictions imposed by the universe are difficult to ignore. Battlefront was never an ultra-hardcore shooter, and even with Battlefield developer DICE at the helm of the reboot that wasn’t going to change, but it feels as if things have gone too far in the other direction. Both kills and deaths can rack up quickly, but there's rarely any sense of achievement from earning a kill streak.

The mix of blaster pistols and rifles, which unlock as you increase in rank, all feel roughly the same. All have infinite ammunition, but overheat if you fire continuously, and there’s no iron sight aiming. You basically pick the one you like the most and stick with it, as there’s not enough variance to make particular guns significantly better than the rest.

You earn experience from every game mode for kills, wins, completing objectives and meeting daily challenge requirements, with a percentage also earning you in-game money for new weapons, costumes and special abilities. Unlockable ‘cards’ let you carry up to three grenades, abilities or one-shot power weapons, with each one tied to a cooldown timer. It means rocket launchers and sniper rifles don’t dominate each game, and prevents annoying play styles like grenade spamming.

There are also even more powerful weapons and abilities dotted throughout each map, along with the Hero character unlocks and a smattering of air and ground vehicles. Each is represented by a floating blue icon, which slightly spoils the sense of immersion, and you don’t actually see your character climb into an X-wing or AT-AT, either. The film’s signature wipe transitions are used instead, which is a nice extra touch. It’s just a real shame the spaceship handling model is so clumsy, at least on a mouse and keyboard. Everything feels incredibly twitchy and imprecise. 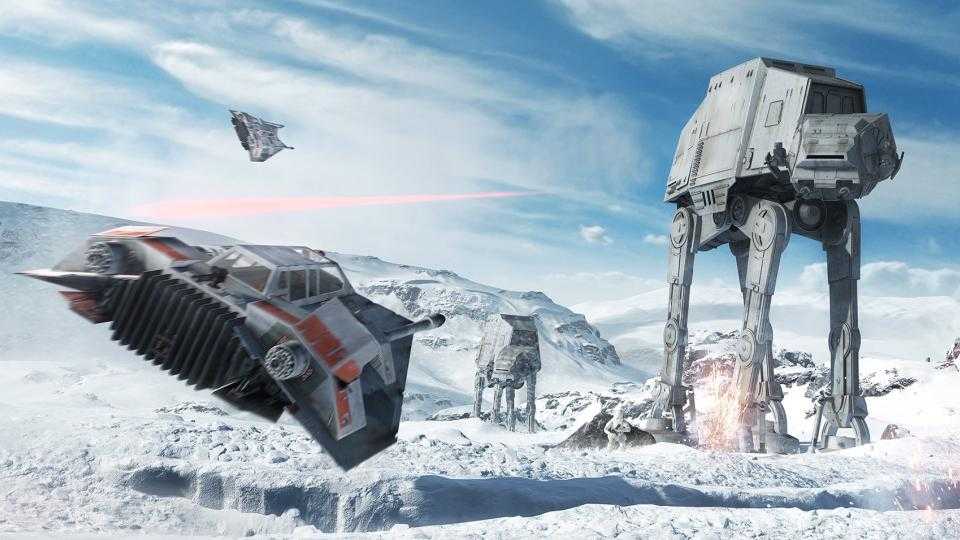 Battlefront is a beautiful game that treats the original Star Wars trilogy with the reverence and respect it deserves. The series has had more than its fair share of duds and awful movie tie-in games, so it’s refreshing to see the characters and locations translated almost perfectly this time around. It’s a must-buy for Star Wars fans, with so many minute-to-minute moments guaranteed to make you smile; force-choking rebel scum as Vader, raining down an orbital bombardment on an advancing AT-ST, the Wilhelm scream that occasionally plays when you connect with a thermobaric detonator.

Whether it has the staying power to keep you playing after that novelty has worn off seems unlikely, however. The simplistic gameplay should appeal to more casual gamers, but Battlefield veterans won’t find enough here to make them switch from modern warfare to space combat, and fans of serious shooters won't appreciatelack of weapon, map and gameplay variety.