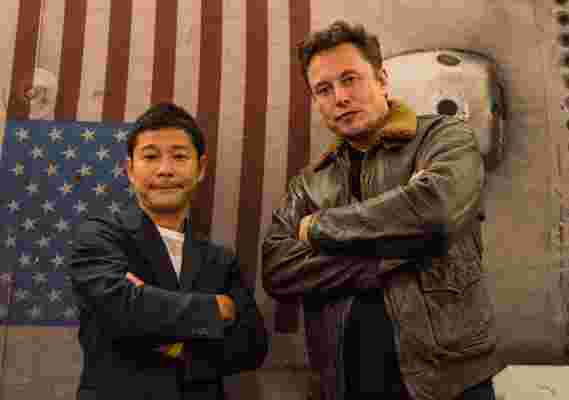 No, seriously. This article is going to be a crazy one.

Entrepreneur and object of Reddit worship Elon Musk has recently provided a few new details regarding his proposed lunar tourism mission. Last Thursday, he revealed the mystery tourist who was to take part in this historic vacation: Japanese billionaire Yusaku Maezawa.

Who is Yusaku Maezawa?

Yusaku Maezawa is the head of the e-commerce company Start Today. Start Today’s fashion subdivision, Zozotown, is enormously successful. Zozotown recently shook the fashion world by announcing a product called the Zozosuit, a form-fitting latex suit that allows wearers to get precise bodily measurements of themselves using a smartphone camera. The measurements from the Zozosuit will then allow users to buy cheap, made-to-order custom clothes from Zozotown. Start Today, Zozotown, and other ventures have been hugely successful, making Maezawa the 14th richest person in Japan. Maezawa is a prolific art collector, spending hundreds of millions of dollars over the years collecting and promoting the arts.

Maezawa has deposited an undisclosed amount of money into SpaceX’s revamped lunar tourism mission. He is using this mission in his project #dearMoon, which involves him taking various artists up to the moon with him , including a musician, a film director, and a painter. The project is detailed in the video below, set fittingly to “Clair de Lune”.

SpaceX’s private mission to the moon will not only be one of scientific significance but one of artistry. #dearMoon hopes to invigorate the artists involved in creating art that will leave historic and beautiful legacies.

Maezawa was one of the two tourists involved in one of SpaceX’s earlier lunar tourism missions involving the company’s Falcon Heavy rocket. SpaceX has since scrapped plans to conduct a lunar mission using the Falcon Heavy, instead focusing on their ambitious new rocket: the Big Falcon Rocket. Which leads us to…

What is the Big Falcon Rocket?

The Big Falcon Rocket, (commonly referred to as the BFR, or as the Big F***ing Rocket by Musk himself) is the rocket that is currently planned for use in the lunar tourism mission. The highly ambitious rocket, for which no current prototype exists, is intended to r eplace all current SpaceX spacecraft. It is being developed for both low-orbit travel (as seen in the above video) and interplanetary, long-distance flight. Musk plans for the rocket to eventually allow his famous plans for the colonization of Mars.

The BFR consists of a 157-ft tall spaceship placed on top of a 191-ft tall rocket booster. The ginormous spacecraft is being built primarily out of carbon fibers , which are woven together like fabric, providing a material that is light but extremely strong . This would make the spacecraft the largest structure to be made of carbon fiber by far. While carbon fiber is extremely durable and lightweight, the harsh temperature and pressure fluctuations of space will provide a hostile and chaotic environment for the material.

Musk intends for the BFR to be 100% reusable , something that has never been possible for any other spacecraft. Most space launches involve the craft detaching from and disposing of multiple parts, including the rocket boosters. Musk says the BFR will be able to launch into orbit, detach its booster (which autonomously returns to the launch site), and await refueling from another ship. Once full of fuel again, the BFR will be able to travel interplanetary distances, including to the moon and Mars.

Experts are divided on whether to call the BFR an exciting prospect or a pipe dream. Whatever the case, the plans for the BFR exist beyond the realm of current engineering, so if it works, it’ll be a historic marvel.

How to Order an Uber from your PC ►