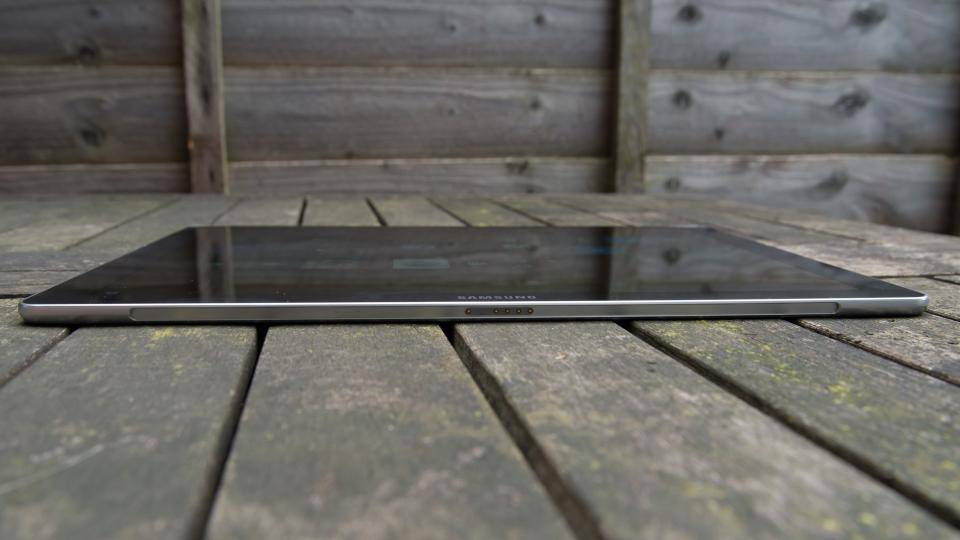 One of the big manufacturing goals with portable computers has been to make them smaller and smaller, without having to sacrifice features or power. It seems strange, then, that even though this goal has been met, I actually carry more devices than I used to, with a phone, tablet and laptop all taking up room in my everyday bag. The phone is a given, but a laptop and tablet seem a little too much to carry all of the time. Surely there’s a better way?

Thanks to Windows 10 and low-power Intel chips, there’s a new category of computer: the 2-in-1. Effectively, these devices are full-on tablets that convert into full-on laptops when you need them. So rather than having two devices, I can carry just the one. But can I really get by with just the one device?

To find out, I’m switching exclusively to the Samsung Galaxy TabPro S, a powerful Windows 10 2-in-1 computer with a 12in screen. Over this series of these articles, the TabPro S will be the only computer I use for everything: for work, for watching movies on the go, and for browsing the internet from the comfort of the sofa. I wouldn’t even attempt to make the full switch if I didn’t have confidence in the hardware, so here’s what’s drawn me to the TabPro S.

One of the reasons tablets became popular was that the switch to mobile processor meant they were thin and light. But tablets were only capable of running cut-down mobile software, rather than full applications that I need for work.

With the TabPro S, I don’t have to worry about power, as its 900MHz Intel Core m3-6Y30 processor can Turbo Boost to 2.2GHz. This is a proper laptop specification, so all of the desktop apps I’m used to running will run properly.

Samsung has used all of its display prowess to ensure that the Galaxy TabPro S has an amazing screen. It uses Super AMOLED technology, which means near-perfect blacks, bright whites and stunning colours, and has a super-high resolution of 2,160 x 1,440.

Power doesn’t mean compromise, though, and the TabPro S is every bit as small and light as I’d expect a tablet to be: the main unit is a mere 6.3mm thick and weighs only 693g. Adding the keyboard cover brings the weight up to just 1.09kg. In total, this means that I’m carrying a lot less bulk than before and it’s more than 1kg lighter.

Thanks to all of the TabPro S’s energy-efficient components, battery life tops out at just over ten hours – all-day computing in a device as powerful as a laptop and as convenient as a tablet. Throw in the built-in 4G modem in the model I’m using, and I’m freed from finding a Wi-Fi hotspot. I’ve got a device that I can use anywhere and everywhere to get online.

Having a separate tablet and a laptop generally means having different apps on each, often to do the same jobs. It’s a little annoying, and often meant I’d favour one device for one specific job, switching between laptop and tablet. And getting the same data on both devices meant using cloud synchronisation in the background.

The Galaxy TabPro S runs the full version of Windows 10, which can seamlessly switch between Laptop mode (standard applications and the desktop) and Tablet mode (a touchscreen interface). Most importantly, both modes can use the same apps and the same data. With the Galaxy TabPro S, I only need to keep my data in one place and I only need to find one app for each task.

It is a proper laptop

For getting serious work done, there’s simply no better alternative to a proper laptop configuration: a great keyboard and touchpad controlling a proper desktop operating system. With Windows 10, I’ve definitely got the latter, but the Galaxy TabPro S provides the former with its brilliant keyboard cover. From the outside it looks like a regular tablet cover, but flip it open and dock the main unit to the keyboard’s magnetic connector and, bang, it’s a full laptop. 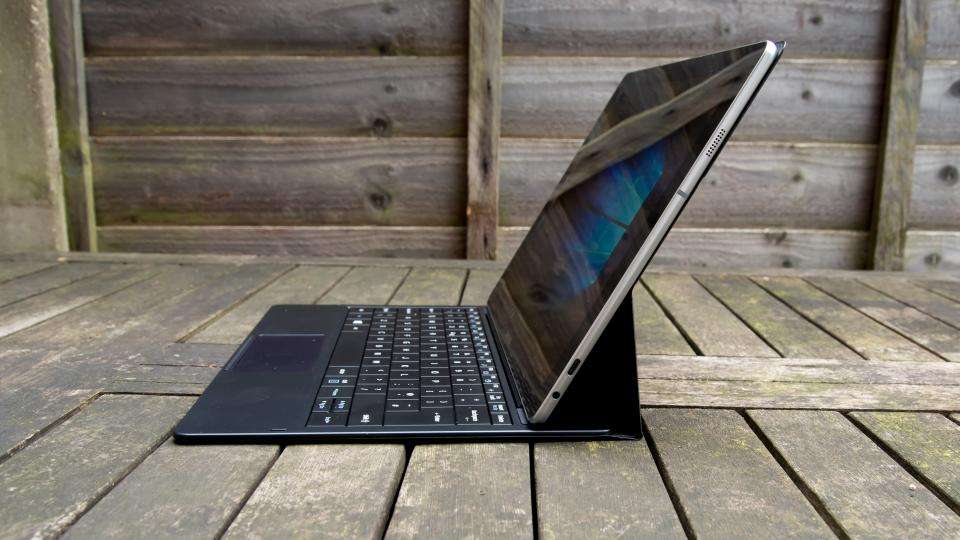 The keyboard is pretty much full-sized, and the keys have a fair amount of travel. It’s like typing on a real laptop, rather than using one of those cheap tablet keyboards that are sold as a second-thought add-on. There’s a touchpad, too, which supports multi-touch gestures such as two fingers for scrolling. With a touchscreen in front of you, the touchpad may seem a little pointless, but it makes selecting text, using menus and navigating regular Windows that much easier. 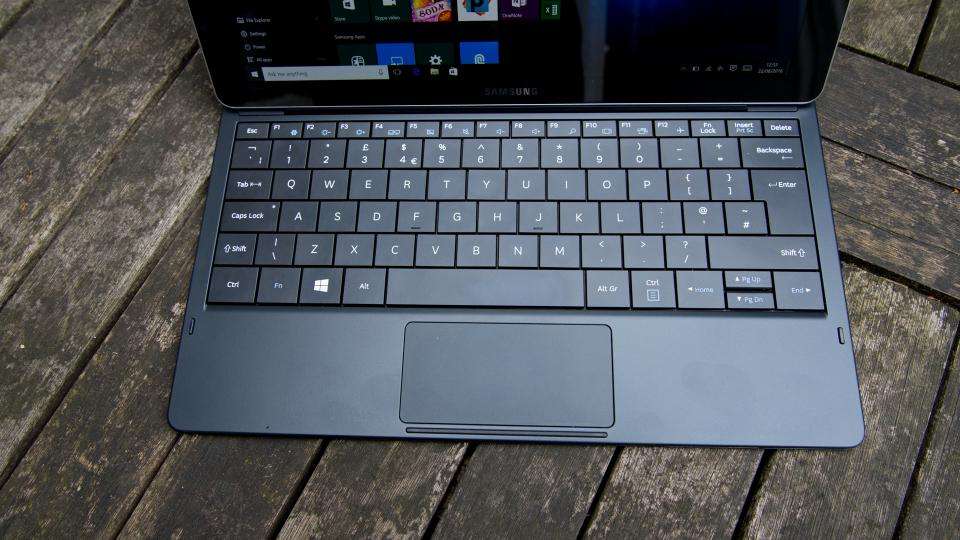 A full laptop means having expansion options, and the Galaxy TabPro S has a USB Type-C port. As well as for charging the laptop, this port can be used with adapters for regular USB devices (memory sticks, keyboards, printers and so on) and for connecting to displays, so I can use a full-sized monitor on a desktop if I want.

It is a proper tablet

Just pull the Galaxy TabPro S out of the keyboard dock and it becomes a proper tablet, with Windows 10 switching to Tablet mode. This pushes the Start screen to take up the full display, letting me easily run touch-friendly apps, although the desktop is still available and all regular apps can be run if I need them. With Windows 10’s brilliant touchscreen interface, I never feel as though I desperately need a keyboard and mouse in this mode, which was a problem with previous versions of Windows. 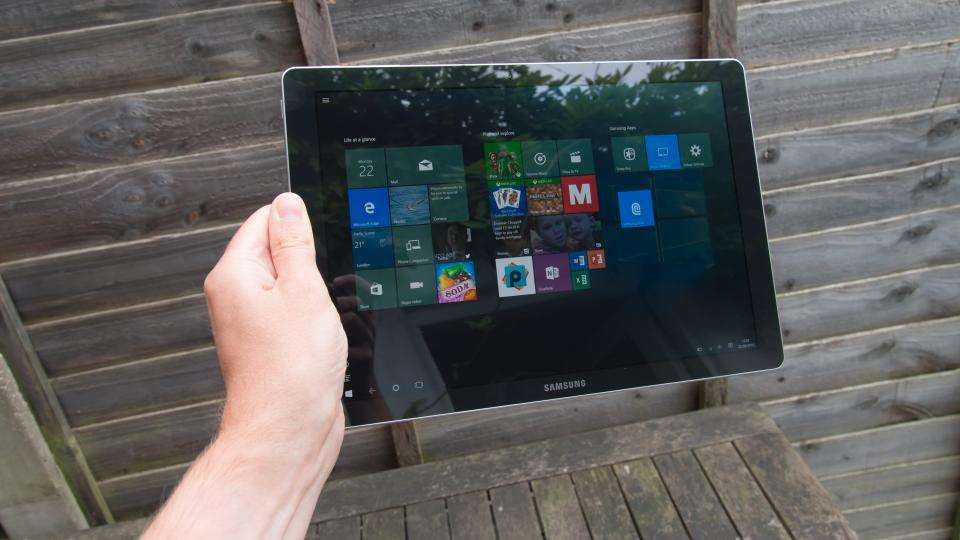